Aikido and the Triangle, Circle, Square

The representation of Aikido principles by the geometrical shapes triangle, circle and square are taken from the Shinto cosmology theory of “Gogyo Gogen” where the elements of existence, Liquid, Solid and Gas are all shown to be transmutable and interrelated.

In his book “Kami no Michi“, Rev. Dr. Yukitaka Yamamoto, the 96th generation Shinto High Priest (Guji) wrote:
“The Principle of ‘Sanmi–Sangen‘ explains the mystery of life. Sanmi–Sangen means the three elements that constitute the basis of all forms of existence. These basic symbols both explain the meaning of and guide the destiny of human life. We can see Sanmi–Sangen operate at many levels.”
O Sensei clearly saw the relationship between this theory and the key principles of Aikido – the diagram below attempts to show how these three shapes symbolise not only the separate core principles but the inter-connectedness of all things. 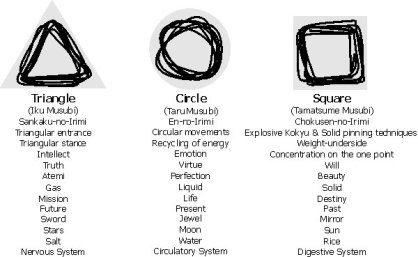 The core shape of Aikido, the spiral, signified by the Circle, is apparent everywhere in the universe. The exact “5/7 logarithmic spiral”, is identical in galactic discs (for example, the Milky Way), DNA strands and sub-atomic particles – O Sensei taught that Ki flows into the body in a great spiral, drawing on the power of the universe.
In incredibly simplistic terms, the Triangle can be said to represent the triangular posture predominant in Aikido, triangulation of arms to centre/hips, and triangular offline avoidance and the Square to represent solidity of stance, or the principles of “weight-underside”.
Thanks for taking the time to read this blog, and I hope it makes you want to find out more about Aikido
http://www.aikido4beginners.co.uk

This entry was posted on Tuesday, April 22nd, 2008 at 5:03 pm and is filed under Aikido martial arts self defence, circle, posture, shinto, square, triangle. You can follow any responses to this entry through the RSS 2.0 feed. You can leave a response, or trackback from your own site.

2 Responses to Aikido and the Triangle, Circle, Square